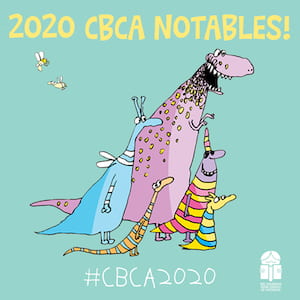 This is a major step in the process of announcing the CBCA Book of the Year winners in multiple categories, which happens at the start of Book Week each year.  Categories are for ‘Older Readers’, ‘Younger Readers’, ‘Early Childhood’, ‘Picture Book’ and the ‘Eve Pownall Award’  for illustration.

This year the CBCA Book of the Year winners will be announced on Friday August 21st, with the short list of titles being considered being announced on Tuesday March 31st.

CBCA National Chair Professor Margot Hillel OAM said the 2020 Notables List was drawn from 517 entries and is “arguably the most diverse award longlist in Australia”.

“Our Notable books are set in small towns and big cities in Australia and overseas. They take us from the ocean to the bush, telling stories of Indigenous, immigrant, disabled, LGBTQI+ and elderly characters. Many were created by ‘own voice’ writers and illustrators.”

“There are genre books that break the rules, such as fantasy crossed with science fiction, history and mystery. Romance that isn’t just for girls. Sports books that aren’t really sports books.”

This year’s notable books for Older Readers are:

Available in the Library NOW:

Coming to the Library SOON:

To read more about the CBCA and the Book of the Year award, visit their website.