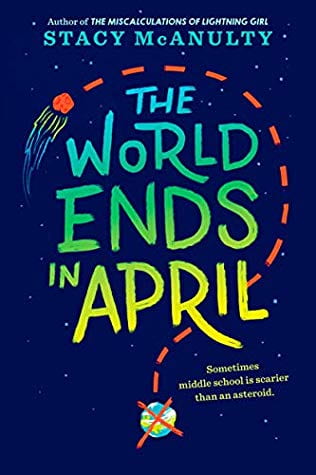 What would you do if you knew the world was going to end in April?

Eleanor Dross has one friend, her best friend, Mack.
She has a survivalist grandfather, Grandpa Joe who takes
Eleanor and her brothers on surprise prepper drills.
She also knows that the world is going
to end in April when a huge asteroid is
going to hit the Earth and cause ‘the end of the world as we know it’. How does she know?
Well the internet tells her so.
Or more precisely, the website of astrophysicist Dr Martin Cologne.
And he must be right, he is an expert, he is
an adult, his website has all the facts.
And science supports this – didn’t a huge
asteroid impact cause the demise of the dinosaurs?

Soon, Eleanor becomes the president of
the (secret) End of the World Club.
For the first time, she is making new friends,
friends who look up to her as the expert of how
to survive the asteroid strike that no-one else believes is going to happen.

In our world of fake news, the ‘all knowing’ internet,
uncertainty about global warming causing the ‘end of the world as we know it’
and world leaders who strike fear into our souls, Eleanor’s story will melt your heart.