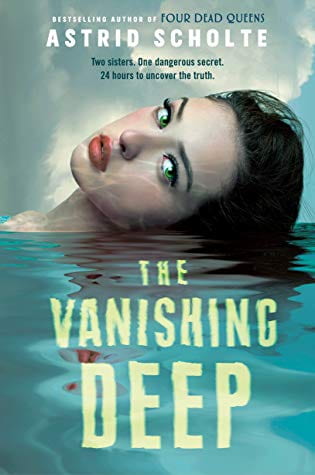 “To survive the next twenty-four hours, I need to become the storm, not succumb to it.”

And become the storm she does…. In a world where the oceans have taken over the land, where sunken citiesprovide treasure for daring divers who explore their depths, where the dead can be revived for 24 hours – for a price.
Tempest Alerin becomes the storm as she battles to save enough to pay to
revive her drowned sister for 24 hours and find out the truth of what happened to their parents.

Tempest is angry. Why did her parents die in a tragic accident?
Why did her sister Elysea drown and leave her alone, without telling her what she knew about the night their parents dies?
There is just one way to get all the answers she needs – pay to revive Elysea for 24 hours and find out the truth.

But once Elysea is revived, things just get more complicated.
So Tempest and Elysea do the unthinkable – break out of Palindromena and embark on a dangerous quest for the truth.
But their actions have consequences not just for themselves, but for the two wardens who were in charge of Elysea’s revival.
As Lor and Raylan chase the sisters across the oceans, the truth about Palindromena and what goes on there becomes clear
and the stakes for everyone becomes life-changing. “But nothing lasts forever. Not the Old World, not the light of the coral, not the people you love the most.
You have to hold on to every moment. Breathe every breath. For you never know when it will be your last.” This is an adventure story with hidden depths. A story about resilience – both of the planet and civilisation after the Great Waves drown the land, and of the individual when faced with devastating loss. The power of family, but also the power of the human spirit to
overcome grief and the power of love – in all its forms.

Read this book for the action and adventure.
Read it for the relationship between Tempest and Elysea.
Read it for a look into our planet’s possible future if society continues to abuse the environment. Read it because it is a great book.