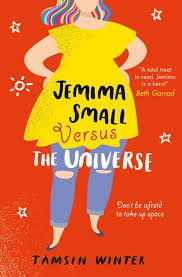 Jemima Small is funny and super smart. She knows a lot of things. Like the fact that she’s made of 206 bones, over 600 muscles and trillions of cells. What she doesn’t know is how that can be true and yet she can still feel like nothing…

Called Jemima Big by practically everybody at school, Jemima doesn’t think her life could get any worse. Until she’s weighed in front of her entire class and forced to join the school’s new “special” healthy lifestyle group – A.K.A Fat Club. She could not feel any less special.

But, Jemima knows that the biggest stars in the universe are the brightest, so when she’s given the chance to apply for her favourite TV quiz show, maybe it’s her time to shine.

This is a funny and touching book, aimed at younger teen readers (Jemima is 12 years old), but suitable for all ages.  It deals with the big issues of bullying, body confidence and ultimately leaves all of us with the message “don’t be afraid to take us space”.