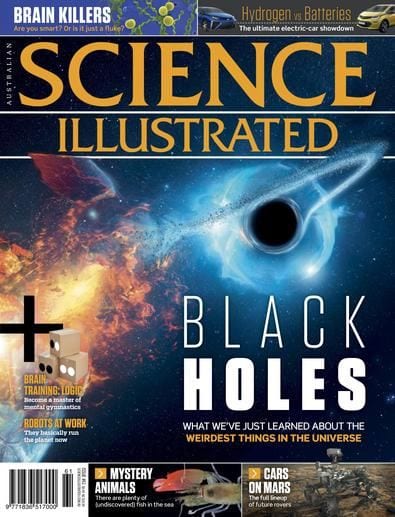 Science Illustrated is one of the most authoritative, most accessible and most expansive magazines about science and the natural world.

Science Illustrated is the magazine for intellectually curious men and women with a passion for science and discovery and adventure and a desire to share that passion with their families.

Every bi-monthly issue is an upbeat, optimistic, visually spectacular gateway to the world of cutting-edge science and discovery, covering an astonishing range of subjects, from the beginning of life to the breathtaking technology of the future – and from the depth of the oceans to the most distant objects in the universe.

Entertaining, educational and breathtakingly visual – Science and Discovery has never looked this good!

In this month’s issue:

Black Holes – what we’ve learned about the weirdest things in the universe.
Brain killers – are you smart? or is it just a fluke?
Hydrogen vs. Batteries – the ultimate electric-car showdown
Brain training: Logic – become a master of mental gymnastics
Robots at work – they basically run the planet now
Mystery animals – there are plenty of (undiscovered) fish in the sea
Cars on Mars – the full lineup of future rovers