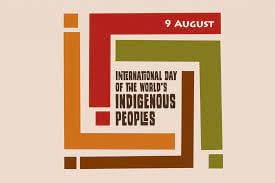 LEAVING NO ONE BEHIND: INDIGENOUS PEOPLES AND THE CALL FOR A NEW SOCIAL CONTRACT.

On 23 December 1994, the United Nations General Assembly decided, in its resolution 49/214, that the International Day of the World’s Indigenous People shall be observed on 9 August every year. The date marks the first meeting, in 1982, of the UN Working Group on Indigenous Populations.

“More than 70 per cent of the world’s population is living in countries with rising income and wealth inequality, including indigenous peoples who already face high rates of poverty and acute socio-economic disadvantages. High levels of inequality are generally associated with  institutional instability, corruption, financial crises, increased crime and lack of access to justice, education and  health services. For indigenous peoples, poverty and gross inequities tend to generate intense social tensions and conflicts.

Eradicating poverty in all its forms and dimensions and reducing inequality are at the heart of the 2030 Agenda for Sustainable Development. The whole of society — not only governments but also social activists, indigenous peoples, women, academia, scientists — all have a role to play in building and redesigning a new social contract that serves the interest of “We, the peoples”, as per the preamble of the United Nations Charter.

Indigenous peoples’ right to participate in decision-making is a key component in achieving reconciliation between indigenous peoples and States. Therefore, a new social contract must combat the legacy of exclusion and marginalization affecting indigenous peoples — through their meaningful and effective participation and the obtainment of their free, prior and informed consent. Consequently, it will lead to meeting the goals of the 2030 Agenda.

The COVID-19 pandemic has shone a light on the effects of growing inequalities and promoted discussion on the urgent need to rethink a new social contract. A new common sense that will work for all peoples and the planet. It has created a unique opportunity to build back a more equal and sustainable world – one based on genuine and inclusive participation and partnership that fosters equal opportunities for all and respects the rights, dignity and freedoms of all.

For the many indigenous peoples disproportionately impacted by COVID-19 worldwide, plans to build back better and rethink social contracts must include listening to their voices, needs and concerns, obtaining their free, prior and informed consent, and include the collective and individual rights of indigenous peoples recognized in the United Nations Declaration on the Rights of Indigenous Peoples. ”

Don’t forget to follow the library on Instagram (@fhclibrary) for regular updates on reading suggestions, book reviews, photos from around the library and more!