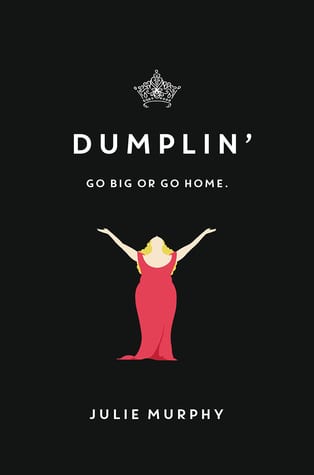 Another highly anticipated YA movie adaptation started streaming on Netflix over the weekend.

Dumpin’ by Julie Murphy tells the story of 16 year-old Willodean Dickson, who, wanting to prove to everyone in her small Texas town that she is more than just a fat girl, enters the local beauty pageant run by her mother.  Throw in a cute co-worker and a soundtrack of Dolly Parton songs and you have yourself a fun, uplifting read about body image, loving yourself and not being held back by the expectations society places on you.

Read the book, available in the library now!.

Love Dumplin’? Then try one of these similar reads, also available in the library!

Revenge of the girl with the great personality by Elizabeth Eulberg

Don’t mess with a girl with a great personality!

Everybody loves Lexi. She’s popular, smart, funny…but she’s never been one of those girls, the pretty ones who get all the attention from guys. And on top of that, her seven-year-old sister, Mackenzie, is a terror in a tiara, and part of a pageant scene where she gets praised for her beauty (with the help of fake hair and tons of makeup).

The time has come for Lexi to step out from the sidelines. Girls without great personalities aren’t going to know what hit them. Because Lexi’s going to play the beauty game – and she’s in it to win it. 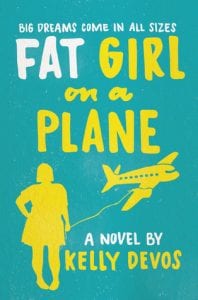 Fat girl on a plane by Kelly Devos

High school senior Cookie Vonn’s post-graduation dreams include getting out of Phoenix, attending Parsons and becoming the next great fashion designer. But in the world of fashion, being fat is a cardinal sin. It doesn’t help that she’s constantly compared to her supermodel mother—and named after a dessert.

Thanks to her job at a fashion blog, Cookie scores a trip to New York to pitch her portfolio and appeal for a scholarship, but her plans are put on standby when she’s declared too fat to fly. Forced to turn to her BFF for cash, Cookie buys a second seat on the plane. She arrives in the city to find that she’s been replaced by the boss’s daughter, a girl who’s everything she’s not—ultrathin and superrich. Bowing to society’s pressure, she vows to lose weight, get out of the friend zone with her crush, and put her life on track.

Cookie expected sunshine and rainbows, but nothing about her new life is turning out like she planned. When the fashion designer of the moment offers her what she’s always wanted—an opportunity to live and study in New York—she finds herself in a world full of people more interested in putting women down than dressing them up. Her designs make waves, but her real dream of creating great clothes for people of all sizes seems to grow more distant by the day.

Will she realize that she’s always had the power to make her own dreams come true? 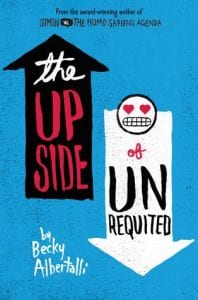 The upside of unrequited by Becky Albertalli

Seventeen-year-old Molly Peskin-Suso knows all about unrequited love—she’s lived through it twenty-six times. She crushes hard and crushes often, but always in secret. Because no matter how many times her twin sister, Cassie, tells her to woman up, Molly can’t stomach the idea of rejection. So she’s careful. Fat girls always have to be careful.

Then a cute new girl enters Cassie’s orbit, and for the first time ever, Molly’s cynical twin is a lovesick mess. Meanwhile, Molly’s totally not dying of loneliness—except for the part where she is. Luckily, Cassie’s new girlfriend comes with a cute hipster-boy sidekick. Will is funny and flirtatious and just might be perfect crush material. Maybe more than crush material. And if Molly can win him over, she’ll get her first kiss and she’ll get her twin back.

There’s only one problem: Molly’s coworker Reid. He’s an awkward Tolkien superfan with a season pass to the Ren Faire, and there’s absolutely no way Molly could fall for him. Right? 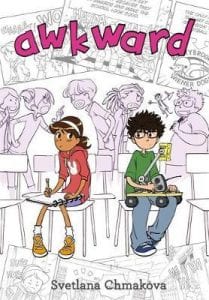 Cardinal rule #1 for surviving school: Don’t get noticed by the mean kids.

Cardinal rule #2 for surviving school: Seek out groups with similar interests and join them.

On her first day at her new school, Penelope–Peppi–Torres reminds herself of these basics. But when she trips into a quiet boy in the hall, Jaime Thompson, she’s already broken the first rule, and the mean kids start calling her the “nerder girlfriend.” How does she handle this crisis? By shoving poor Jaime and running away!

Falling back on rule two and surrounding herself with new friends in the art club, Peppi still can’t help feeling ashamed about the way she treated Jaime. Things are already awkward enough between the two, but to make matters worse, he’s a member of her own club’s archrivals–the science club! And when the two clubs go to war, Peppi realizes that sometimes you have to break the rules to survive middle school! 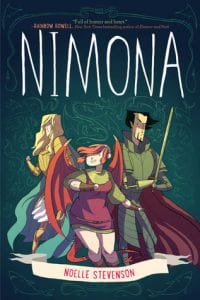 Nimona is an impulsive young shapeshifter with a knack for villainy. Lord Ballister Blackheart is a villain with a vendetta. As sidekick and supervillain, Nimona and Lord Blackheart are about to wreak some serious havoc. Their mission: prove to the kingdom that Sir Ambrosius Goldenloin and his buddies at the Institution of Law Enforcement and Heroics aren’t the heroes everyone thinks they are.

But as small acts of mischief escalate into a vicious battle, Lord Blackheart realizes that Nimona’s powers are as murky and mysterious as her past. And her unpredictable wild side might be more dangerous than he is willing to admit.