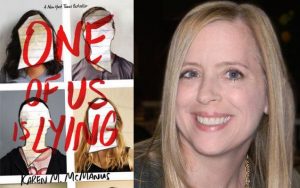 Karen McManus’s debut thriller, One of Us Is Lying, presents a routine detention turned closed-room mystery. Simon, the widely feared and detested creator of a savage gossip app, dies in that detention room, and the police quickly classify it a homicide…making the four teens who served alongside him suspects. Each had a reason to fear Simon, as each had a starring role in the app update he was planning to run the day after he died. The four take turns narrating the murder’s aftermath in a twisty, breakneck ride toward determining whether it’s all a big setup—or whether one of them is a killer. The addictive page-turner hit the New York Times bestseller list on its release, and has stayed there since. Here’s author McManus to discuss the flash of dark inspiration that turned into her first novel.

“You see us as you want to see us—in the simplest terms, in the most convenient definitions. But what we found out is that each one of us is a brain…and an athlete…and a basket case…a princess…and a criminal. Does that answer your question?”
—The Breakfast Club

I owe the concept behind One of Us Is Lying to a song.

I was driving to work when “Don’t You (Forget About Me),” from The Breakfast Club, came on the radio. I can never not turn up that song, so I did, and while it was playing I thought about how well the movie has held up over the years. Every high school has its own version of those five iconic characters: the brain, the jock, the princess, the criminal, and the outcast. There’s something irresistible about bringing them together and forcing them to interact, like John Hughes did.

It’d be fun, I thought, to write something inspired by that movie. But with a twist.

Needless to say, the twist took a dark turn. I spent the next half hour thinking of ways you could kill somebody in a classroom without anybody knowing you’d done it. It was one of the strangest commutes I’ve ever had.

One of Us Is Lying centers on a mystery: five teens walk into detention, but only four walk out alive. The fifth, Simon, ran a notorious gossip app that was going to post life-changing secrets about each of the other four. When investigators learn his death wasn’t an accident, the four teens all become murder suspects. The book blends a lot of storytelling elements I love: ensemble casts, a closed-door mystery, unreliable narrators, and people brought together by circumstance who turn out to have more in common than they think.

That last one is the heart of the novel, and the reason I think it has resonated with readers. Everyone identifies more with one “type” than another—that’s why the notion of being sorted into a Hogwarts House is so brilliant and enduring. (And, by the way, the four main characters from One of Us Is Lying could each easily be sorted into different houses. Can you guess which?)

At the beginning of the story, brainy Bronwyn, athletic Cooper, homecoming princess Addy, and bad boy Nate all act in keeping with their archetypes. They know their roles within the high school hierarchy and—even though they suspect deep down that they’re not perfect fits—they play them willingly.

But nobody is just one thing. We’re all multidimensional people with hopes, dreams, fears, and—if we’re the main characters in a high school whodunit—interesting backstories. After Simon’s death and the ensuing investigation, the surviving students have to deal with the fact that the secrets they’d tried to keep hidden are now out in the open. Their masks come off, and the people beneath start to emerge.

By the end of the book all four main characters—for better or worse—are doing things that would have seemed impossible in the first chapter. They’ve undergone the kind of messy, imperfect, two-steps-forward-one-step-back growth that most of us experience when we start to figure out who and what we really are.

[This article by Melissa Albert appeared on B&T Blog on August 8th 2017.  Modified to take out links to book purchase]