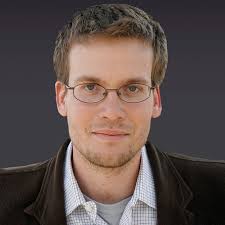 John Green is the #1 New York Times bestselling author of Turtles All The Way Down,  Looking for Alaska, An Abundance of Katherines, Paper Towns, and The Fault in Our Stars. He is also the coauthor, with David Levithan, of Will Grayson, Will Grayson. He was the 2006 recipient of the Michael L. Printz Award, a 2009 Edgar Award winner, and has twice been a finalist for the Los Angeles Times Book Prize. Green’s books have been published in more than 55 languages and over 24 million copies are in print. John is also an active Twitter user with more than 5 million followers.

Books available in the library by John Green:

Turtles All The Way Down

An Abundance of Katherines

The Fault In Our Stars

For more information about John Green visit his webpage at: