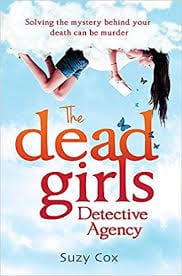 Snapchat and HarperCollins are launching a mobile adaptation of YA mystery novel, The Dead Girls Detective Agency on the Snapchat Discover page.

On October 10, 2018, Snap launched its new Snap Originals: five-minute episodes of original shows with new episodes premiering daily. At the moment, there are twelve shows available through the Discover feature. All episodes are vertically shot, meaning they’re perfectly adapted for mobile viewing.  This adaptation is just one of a few ways that technology continues to push storytelling further into multimedia territory

If you want to read the book before you watch, the library has the original book available to borrow.

Lorna has been dead long enough to know the Rules. But that doesn’t stop her showing up at her little sister’s high school production of Hipster Hamlet. But when she arrives, a lighting rig comes crashing down on the lead cast member mid-performance. All fingers point to Lorna’s little sister, Emma, and it’s up to The Dead Girls Detective Agency to find the real culprit. Unless Em’s not as innocent as she looks?

Charlotte wants to help Lorna prove her sister’s innocence, but she’s completely distracted. Not only is her ghostly-self suspended in this New York-limbo-hotel, she is having to deal with the fact that the very alive love of her life has moved on. And then there’s the cute dead boy Edison, who seems to be acting nice all of a sudden. But is Charlotte ready for a new boyfriend, and one with such a murky past?

EpicReads – “Did you know Snapchat is adapting this fall’s must-see YA mystery?” by TeamEpicReads – 32rd October 2018