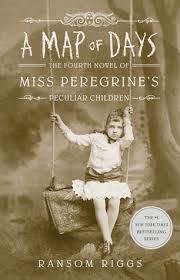 The arrival of the 4th Miss Peregrine’s Home for Peculiar Children series is coming!

Book 4, called Map of Days, due in early October, picks up the story of Jacob Portman after he managed to save the peculiar world.  Jacob returns to his home in Florida with the whole peculiar gang and attempts to blend in. He discovers a subterranean bunker that once belonged to his grandfather, and clues about a possible double life start to emerge, along with plenty of terrifying revelations about the American peculiar world.

Read a brief excerpt from the new book, found on the Entertainment Weekly website.

Excerpt from A Map of Days, by Ransom Riggs

“I touched Emma’s hand and raised a finger to my lips. I mouthed the word to her silently — Hollow.

Emma looked, for an instant, terrified — and then she swallowed hard and reined it in. She put her lips to my ear.

“Can you control it?” she whispered.

It had been months since I’d spoken hollowgast, or even confronted a hollow in person. I was way out of practice, and even at the top of my game, my control over a hollow had never come instantly.

It was in the cold storage locker with us. My inner compass needle was warming up, even as my body was freezing, and it told me the beast was just outside the plastic curtains. We could hear it chewing on something, grunting and slavering as it ate. We crouched by a wooden crate full of radishes, trying to make ourselves invisible as the seconds ticked by.

It tossed aside whatever it had been eating and let out a loud belch.

Emma shot me a questioning look — anything? — and I shook my head. Nothing yet. I needed to hear it speak.

It took a step toward us, its shadow falling crooked across the plastic curtains. I listened in vain for anything I could use to get a toehold in its brain — any little utterance would help — but the hollowgast was quiet, but for its ragged breathing. It was sniffing the air, gathering our scent.

I tapped Emma and raised my thumb. We rose slowly to standing. We were going to have fight.

Emma put out her hands, palms-up, and I grit my teeth, which were chattering either from cold or from fear. More likely the latter. I was surprised at how scared I was.

The hollow’s shadow warped. One of its muscular tongues poked through the curtain flaps and curled experimentally in the air, like a periscope that was spying on us.

Emma took a half step forward and quietly lit her hand-flames. She kept them small, but I could tell from the way she tensed her forearms that she was building up to a burst. Now the hollow’s second tongue pierced the curtains. Emma’s flames climbed a little higher, then a little higher still. A drop of freezing water hit the back of my neck. The icicles on the ceiling were starting to melt.

It happened suddenly, as violence often does. The hollowgast screamed and punched its last tongue through the curtains, and then all three of them came at us. Emma shouted and released the blast of fire she’d been holding in reserve, and just as the tongues reached us, they got burned and reeled suddenly back again—but not before one of them wrapped itself around my foot, and dragged me along with it.

I slid across the floor on my back, through the curtains, and out into the larger cold storage room. The hollow had flung itself backward against the door to escape the fire, and it was pulling me toward its open mouth. I stuck out my hand as I slid, raking it along the shelves until I managed to hook my fingers into something. But it didn’t stop me — it was just a wooden crate, and it yanked away from the shelf with me as I slid.

I heard Emma shouting my name. Acting purely on reflex, I grabbed the crate with my other hand and held it out in front of me — and when I reached the hollow, it jammed right between its jaws.

It let my ankle go for a moment, giving me enough time to scramble away from it. I’d heard it utter a few sounds now and I tried them in my own throat, summoning the strange guttural language of hollows from wherever it had been slumbering inside me.”