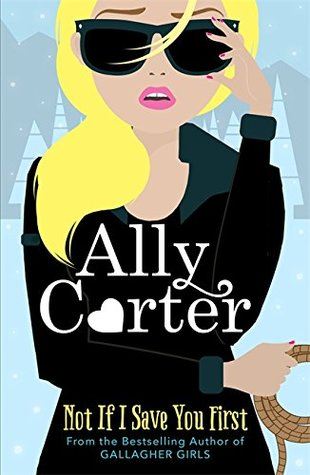 Things that can kill you in Alaska:

Maddie is living in isolation in Alaska with her ex-secret service father who often leaves her alone when he is working.  This has taught Maddie how to survive in the harsh environment she finds herself living in after her father in injured whilst saving the first lady in a failed kidnapping attempt 6 years earlier.  Maddie was best friends with the President’s son Logan, but despite her writing to him constantly for the first few years, she hasn’t heard from him.  But then Logan is sent to live in Alaska with Maddie and her father after one too many times of slipping away from his secret service agent.  What happens next is a fun, exhilarating ride through the deadly Alaskan wilderness as Maddie puts all her survival skills to use saving Logan from Russian kidnappers.

If you enjoy this book, why not check out other books by Ally Carter we have available in the library?

This exciting new series focuses on Grace, who can best be described as a daredevil, an Army brat, and a rebel. She is also the only granddaughter of perhaps the most powerful ambassador in the world, and Grace has spent every summer of her childhood running across the roofs of Embassy Row. Now, at age sixteen, she’s come back to stay— in order to solve the mystery of her mother’s death. In the process, she uncovers an international conspiracy of unsettling proportions, and must choose her friends and watch her foes carefully if she and the world are to be saved.

The Gallagher Academy for Exceptional Young Women is an institution founded by Gillian Gallagher in 1865 as means for young women to study espionage. The current headmistress is Rachel Morgan, and the school is located in a classified location. The adults in the outside, average world believe the Gallagher Academy to be a prestigious, all-girls school, while the local children view it as a preppy school for privileged snobs. Gallagher Girls are trained in martial arts, taught real espionage history, learn political secrets, and are given extra credit for cracking CIA codes as preparation for their futures in espionage services.